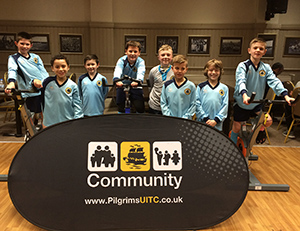 Staff and players from United in the Community, Centre of Excellence and Boston United Community Football Club have raised over £2,000 after successfully completing an 18-hour static bikeathon challenge covering the distance from Lands End to John O’Groats – and the figure is still rising!

Players from Centre of Excellence and BUCFC have raised £1129.50, which will go towards funding their respective youth schemes. United in the Community staff that took part have raised £910 for the Macmillan Cancer Support charity so far.

Lewis Thorogood who helped organise the event said, “We would like to thank everyone who got involved and to everyone who has donated so far. We’d also like to thank TruGym, Jamie Gordon, Kirton Middlecott Sport & Fitness Centre and Creations of Boston who all kindly allowed us to borrow bikes for the event.”

“Everyone really got stuck in and it was a fantastic effort from everyone – we managed to get there and back in 17 hours so we hit our target and then some. It was a huge commitment not only to give up their time, but also to those who helped the next day at the first team game against Gainsborough Trinity on very little or no sleep!” Steve Welsh, Head of Youth.

“It was a great event and it was fantastic to see so many people getting involved; even parents of the players stayed to help give moral support. There was a great atmosphere which helped us to smash our target!” Sam Jackson, administrator for United in the Community.

Donations are still being welcomed – you can donate to the Centre of Excellence and BUCFC schemes at The Jakeman’s Stadium, or to donate to United in the Community’s Just Giving page for Macmillan Cancer Support.