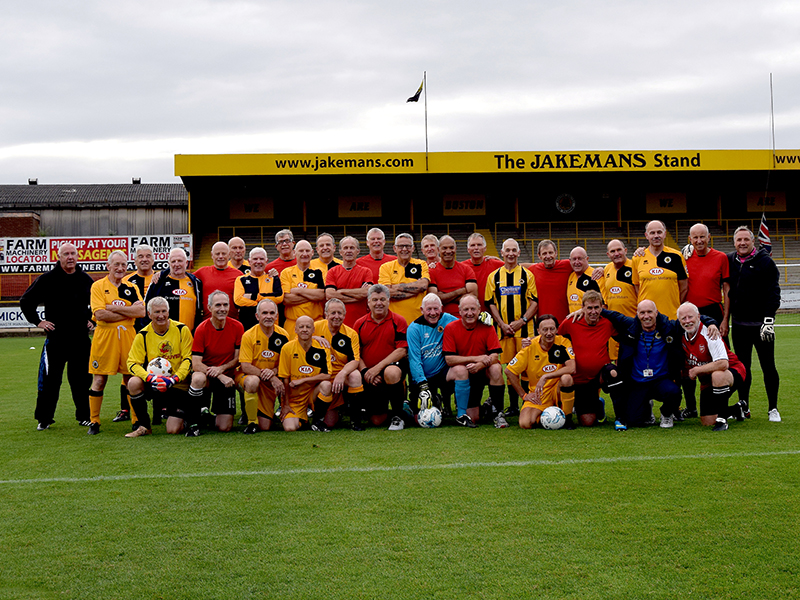 Boston United’s walking football team were in action on Wednesday 6th September against Vancouver Classics, a visiting team all the way from Canada.

The Vancouver Classics, who are a team primarily made up of over 60s, are currently touring England and taking on a variety of teams along the way including Boston United.

The game, which resulted in a 4-1 win to the visitors, ended with a lovely meal and drinks in The Pilgrim Lounge where both teams enjoyed talking about their favourite subject for a couple of hours – football!

This was a great experience for the Boston team – both to meet such a fantastic team and find out all about their travels, but also a challenge because it was their first “running” match against a team who play it regularly around the world!

Boston United’s walking football team adapted very well to playing a proper running game and in a very even first half went in loosing 1-0. The second half wasn’t quite so good – Vancouver scored three quick goals to take a 4-0 lead. Boston settled down again and got back to moving the ball and the team managed to score after a good move from the front men, so the final score: a 4-1 win for Vancouver.

Player Mick Lawson, who scored the consolation goal said, “Before the game someone said to me, ‘how fit can they be they’re over 60’ – well a bunch of dedicated footballers traveling the world can be very fit at 60! We had a lovely meal after the game and enjoyed a couple of hours talking about our favourite subject. All in all, a great day; to play football at our age and enjoy the social side as well – it’s fantastic”

Dave Scotney, Boston’s walking football coach added “the Canadian team had some great feedback after the game. Their players and supporters, as well as our lads commented what a great experience it was to play at an excellent stadium like The Jakemans Stadium, and to bond and mix with people and players from a different country over a meal and drinks.”

Mick added, “On behalf of all the players, we’d like to thank to Dave and Mike from Vancouver for organising such an event. But most of all to the Vancouver team and supporters for making it possible. I wish them luck in their remaining games and a safe journey on their travels. Just one more thing – Boston’s goal scorer a certain Mick Lawson – living his dream!”

Following the meal, the Vancouver Manager and Goalkeeper Mike Walls presented Boston United with a few souvenirs to mark their visit, and in return the Vancouver Classics received a Club pennant and a framed match logo from the Club courtesy of player and director Chris Cook. Referee Dave Bent was also presented with a with a superb Canadian Red Referee’s Jersey which was a nice surprise for him!

Dave Scotney added, “Though going 4-1 down, I am so pleased with my players for their level of performance, endurance and fitness – this was their first “running” match against a team that has played it regularly around the world, and us having only done the walking version before I think they played superb. I was chuffed that Mick “Mr Boston United” Lawson was the man to get our consolation goal, a very fitting end to the game.”

Boston United’s walking football formed just over a year ago, and it is fantastic that the club have been visited by a Canadian team for a game of running football. Walking football is a fantastic way for the older generation to keep fit and active; many of Boston’s players have had hip or knee replacements yet they all say these sessions have given them a new lease of life which is fantastic to hear.

A few Boston United players quipped after “When do we receive our International Caps?”… And come to think of it, there cannot be many times when a United team has played an International match! There was also mention (and some demand) for a return match on the Vancouver Coast in Canada, so watch this space!

The Vancouver Classics are now off again on their travels on the next leg of their British Tour, heading south to London to play an Over-55s Crystal Palace Team and taking in a trip to Canterbury. They have other matches planned to include a visit to Chester and match against Chester FC Seniors.

Boston United’s walking football team team train every Monday 7-8pm and Thursday 5.50-6.50pm at Peter Paine on the astroturf, £3.50 per session. Anyone 45 and over is welcome to join!