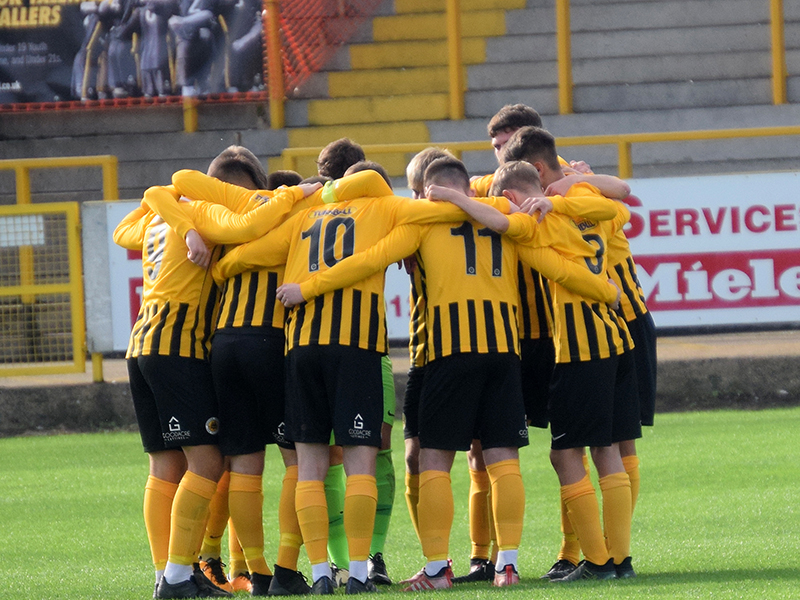 We spoke to Boston United’s technical director Lee Mitchell about how he is putting steps in place for Boston United to be the best place for young, local male and female football players.

Developing local, home grown talent is key – and you cannot do that without first instilling a love of the game in players from a very young age. Players have to want to come because they cannot wait to be there every week playing football, making new friends with their team mates. Once you have that then the learning can really start to take place – this is a key and very important step for Boston United’s Technical Director Lee Mitchell.

Lee oversees the football academy pathway, and an important part of his agenda is to create home-grown female and male academy and inevitably, first team players that have come through the ranks at Boston United – from their Tiny and Young Pilgrims, to their grassroots and academy Centres teams (U13 to U16) and Under 19 squads, as well as progressing girls from their Wildcats and girls football club to Boston United Ladies F.C.

“Where we are at as a football club throughout, we have to be realistic and look at things that can really make a difference and at the same time that are achievable for our football programmes and academy. Every young player that we come into contact with as a club from a very young age has the potential to make it. It is our job to help them achieve this. Parents need to know that their kids are safe and will continue to grow and develop as individuals and in football with us; our aim is to progress their child through the football club’s ranks and produce locally grown talent.”

But this is easier said than done – more often than not, the club find that players that show talent are snapped up by the bigger league clubs such as Nottingham Forest, Lincoln City or Peterborough United – and Lee understands that these clubs will come knocking.

“We are addressing everything from the ground upwards from the players and parents to the coaches, facilities, and the environment we create.

“These players will have a clear vision of what we are about as a club and where we are looking to go. We are under no illusions that along the way, if we are doing everything the right way and how we want to develop our players, the clubs that are higher up the league to us will come knocking for our players, which we expect – but we see that as part of our success.”

Lee believes though that Boston United have something really special at the club, and what they can offer and how they offer it is a real attractive prospect to local male and female players – from the first teams, right down to their youngest players.

“At Boston United, players have a realistic opportunity to develop and achieve a place in our first teams in comparison to if they went to higher league clubs. Yes, parents may believe that it looks better if their son or daughter plays for The Imps or Forest, but with Boston United it can be more achievable. Craig Elliott has shown a great interest in our young players attending their training sessions and fixtures – but it is my job and the players’ to work hard and make sure they have a real chance to achieve a place with the first team.”

“I have a five year plan that is being set in motion now – and this will encompass everything from our Tiny Pilgrims for really young footballers just starting out at their toddler years, our Young Pilgrims, BUCFC grassroots teams, Academy girls and boys teams, Under 19s and Ladies F.C to the first team and their philsophy. Everyone will follow the same pathway and work together to make sure our players are learning and developing the right way – so that when they reach an older age and head in to our U19 academy – they are more likely to be ready to make that step up.”

Boston United’s first look when it comes to filtering in to their Sports College and Under 19 or Ladies F.C. teams (where they offer full time education alongside daily training sessions) is their own academy and grassroots teams on the club’s Talent Pathway. They have teams for both boys and girls, and it is important that they continue their players’ football pathway once they leave the Under 16 teams.

“We first look at our own players to filter in to our Under 19 and Ladies F.C. as it is really important for us to continue their pathway. A lot of these players have been with us right from an early age, like five or six years old when they joined our Tiny Pilgrims – and it is such an achievement when we have developed and nurtured these players. And when they reach the Ladies F.C. or first team – wow that is such a proud moment for us as a club. That’s what this is all about.”

After the football club have looked at their own, they will then look at other ways to filter talented players in, either those who have been released from other clubs or players who attend trials throughout the year.

The environment that Lee is creating for the players is something to rival clubs that are in higher leagues to Boston United – the players not only get top quality coaching and academic support to help them excel, but also support and feedback systems benefiting from game analysis.

All of their Under 19 players wear GPS tracking systems during games which records what they have done so that their coaches know how to plan training sessions, workload and intensity to get the best from their players and reduce the risk of injury.

The holistic approach that the club have helps get the best from every individual player, who are then reviewed and tested in the first team environment to see if they are at or have the capabilities to play at the current first team standards expected within the current league.

Something very important to Lee and the rest of the team though is giving their players an opportunity to progress through the club no matter what standard they are – which is why they also offer development squads in a local Schools and District League. “By offering two squads, an advanced and development level, means that we can take player development to the next stage. We’ve had young players come to our college and football academy who haven’t been particularly confident, and they have started out as a development player – but with the right coaching from us they have flourished and moved up in to our advanced squad. So, there is a real chance there for everyone to progress.”

Over the years, Boston United has seen huge success when it comes to locally grown talent pushing their way through the ranks to the first team or in to professional football – showing that it doesn’t matter what league you are in but how you are coached and nurtured.

Under 19 player Taylor Gray signed for the first team and made his first appearance in an FA Cup game, while Harry Vince, who came through from their Centres academy to the Under 19 youth squad, signed his first professional contract with Boston United on his eighteenth birthday and went on to represent England in their C-squad. Their most recent success came when Under 19 player Jack Withers was snapped up by Premier League club Swansea City in January 2018. A number of female players have also reached the England Talent Pathway, Regional and National Performance Camps or attended national camps to represent England, Wales and Scotland.

However, looking at the number of academy players within the club and how harsh the world of football is – it is unrealistic to say that all with find success with Boston United’s first team, but that does not mean it is the end of the road.

They could go on to find success with another club (something that Lee takes very seriously and will ensure he has the discussions in place to make sure it is the right move for the player) or they may decide that professional football is just not for them.

“It is not all about playing football – we take things seriously when it comes to our players and we want to help them grow as young adults with the best possible life skills. Realistically not all players can or want to play football at the highest possible level, some just want to play local football and have other career aspirations and we really feel it is important to support them in this.

“Boston United can offer so much more, but our players’ education will always come first. We support our players every step of the way to make sure they are successful and to give them real life skills that they can apply wherever they go.

There are plenty of opportunities at Boston United that allow their players to expand their knowledge and develop their careers away from the pitch, but still within the game such as in coaching, fitness, game analysis, sports science and more. They can also go in to officiating and coaching where they can achieve FA qualifications which opens doors for a coaching career.

Lee has also given Boston United great links directly to Universities and Clubs out in the States and Dubai where students can go to study and play or work over the summer months as coaches. Game analysis, fitness and conditioning and community volunteer hours are all an important part of the package that the club look to support their students with too.

“For us our ultimate dream for any of our players is for them to progress all the way up to the first team or Ladies F.C – that is what this is all about. Craig Elliott is keen to help us with our long-term goal to produce local players, and it’s refreshing to know that he is behind us 100%. But we are also immensely proud when they achieve in other areas too such as with refereeing, coaching or when they take a keen interest in video analysis work – these are all as equally important and one of our goals is to help these young players figure out where they want their career path to lead.”

Boston United Sports College and Football Academy are holding an open day on Saturday 8 December 11am to 1pm at Focus One, Mill Road in Boston for prospective students and players aged 16 to 19 years old – take a tour of the college, meet the lecturers and coaches and find out more. Please email academy@bufc.co.uk for more information. You can also visit their Facebook evetns page: www.facebook.com/events/1984485201646284