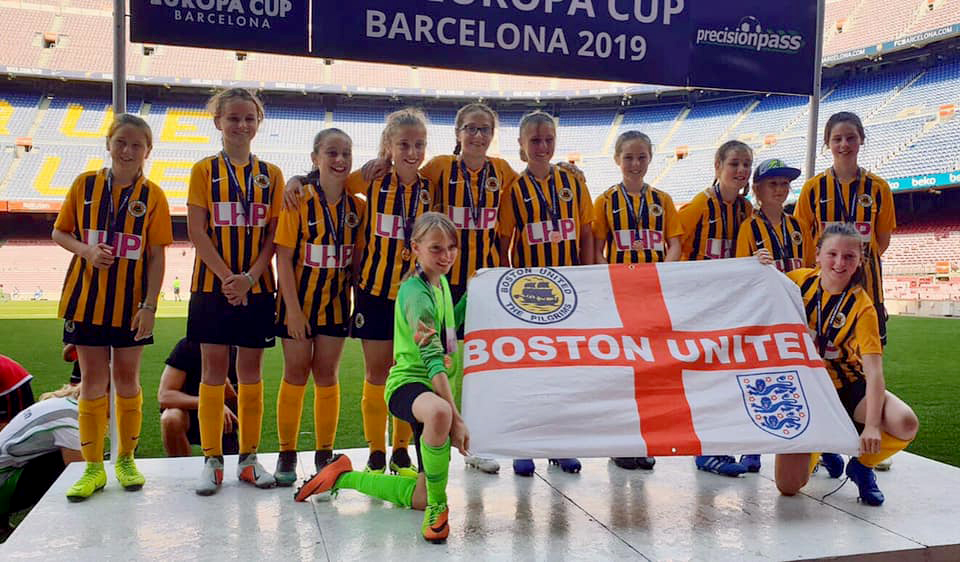 Boston United under-12 girls’ team have just returned from a dream trip to the Nou Camp Stadium in Barcelona, thanks to generous sponsorship from Lincolnshire Housing Partnership (LHP), Freshtime Future’s Trust and Screed Floor, amongst other individual donations.

The Boston team were the only girls’ squad to take part in The Europa Cup – a youth tournament featuring teams from England, Wales, Denmark, Spain, Malaysia and Zambia – and finished third in their group competition, which was held at the world-famous home of FC Barcelona.

After being invited to the tournament, coaches Ricky and Jamie set up an online fundraising page in the hope to raise £6,000, which would cover the cost of taking the side to Barcelona. They were boosted by sponsorship of £1,000 from LHP, £2,500 from Freshtime Futures Trust and £1,000 from Screed Floor.

With this generous support they reached their target, and the team became the first English grassroots girls team to play at the home of Spanish giants FC Barcelona, the Nou Camp and follow in the footsteps of some of the best players in the world such as Messi, Ronaldinho and Maradona.

The girls impressed with their performances at the 99,000-seater stadium, and Jamie Hunt, Head of Digital and Social at Sky Sports, who was in attendance, praised the girls for their efforts:

“It was a pleasure to watch Boston’s brilliant girls play some incredible football in Barcelona. These girls definitely can and everyone at Boston United and the Boston United Community Foundation should be immensely proud of them.”

The girls have also been praised by the tournament organisers themselves for being the first girls team to take part, and for showing exemplary levels of team spirit, desire, effort and positivity, and for “flying the flag for their club, country and female football”.

For more photos and videos from the Europa Cup, please follow the tournament’s official Twitter page, as well as the tournament organiser Precision Pass.