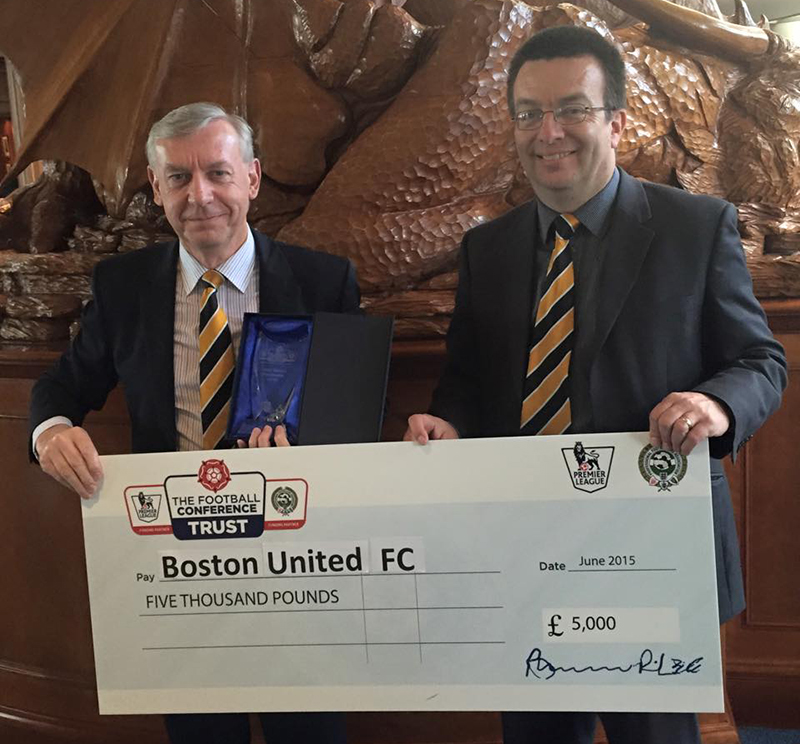 United in the Community, part of Boston United Football Club, were crowned the winners of ‘Best Health Project’ for their Active Pilgrims project at the Football Conference Trust’s annual general meeting at Celtic Manor Resort in Newport.

There were over 60 separate entries for this year’s awards and Trustees were impressed with the range and impact of all of the projects, including United in the Community’s Active Pilgrims project.

Chairman Brian Lee said, “There is some great work taking place across all clubs and every one should be proud of what they have achieved this year.” Boston United’s vice-chairman Neil Kempster accepted the £5,000 cheque on behalf of United in the Community.

United in the Community’s Active Pilgrims project is all about creating and developing affordable, accessible sport opportunities for adults in the Borough of Boston. The project targets various sectors of the community including disabled people, semi sporty people and those who don’t participate frequently in sport. The three-year project, which is funded by Sport England and the Football Conference Trust, gives people the opportunity to try out new sports such as badminton, golf, netball, futsal and a variety of fitness classes, either for free or at a low cost. For more information, please visit www.pilgrimsuitc.co.uk or call 01205 364406.

Boston United Football Club was also given the Best Publication accolade for their match day programme, “The Pilgrims” in Conference North for a fourth successive season.