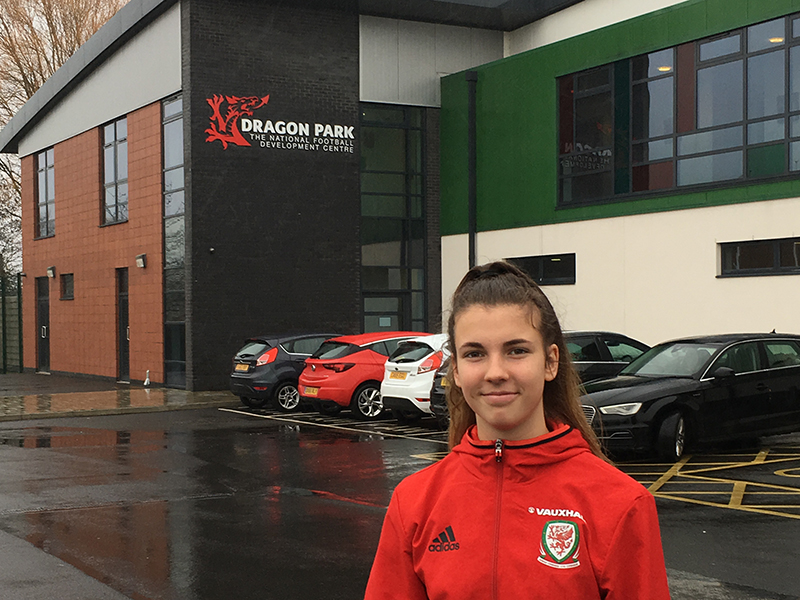 Last month Boston United Ladies Goalkeeper, Olivia Clark attended the combined Wales Women’s Senior Squad and B squad training camp in Wales. Whilst she was there, Olivia kept a diary of what she got up to give an insight into what happens at these training camps!

This was Olivia’s first senior call-up, and we were all really chuffed that Olivia got selected to attend as it’s testament to her hard work and dedication in women’s football.

Day 1 – Tuesday 16th January
I arrived at camp for 5pm and was given my Wales tracksuit and training kit which was then followed by a meeting before training. It was nice to meet the rest of the players who had been selected – players from a range of well-known clubs such as Arsenal Women FC, Cardiff City Ladies FC, Everton Ladies FC so I was really excited to have been selected.

We trained at the University of South Wales on the indoor 3G for a couple of hours before returning to the hotel. I thought both the tempo and standard was very high at training.

Day 2 – Wednesday 17th January
Today, we observed the ‘A’ squad training session at Dragon Park before returning to the hotel for an hour of strength training in the gym. We then went out on the pitch for a training and recovery session afterwards, and had some blood tests done.

Day 3 – Thursday 18th January
We had a team meeting together where we walked through set pieces on the pitch, and then trained with the ‘A’ squad in the afternoon. We played a short game against the squad, which was a great learning experience for me!

Day 4 – Friday 19th January
Today we had training in the morning at Dragon Park on the pitch, and a team meeting to go through the plan and set pieces for the match the next day. We then went to observe the ‘A’ squad play a friendly match against a men’s youth team.

Day 5 – Saturday 20th January
We had a friendly match against a boys’ team today – I didn’t get to play but it was a good experience to be involved in the warm up and pre-match preparation.

Day 6 – Sunday 21st January
Today, I trained with most of the ‘A’ squad players in the morning, and then all the goalkeepers analysed the performance of the ones who played in the matches. We then did analysis with the rest of the squad which was really in depth and I learnt a lot from this exercise. We were also given iPads so we could analyse some more clips from the game in our own time.

Day 7 – Monday 22nd January
We had a light session in preparation for a friendly match against the ‘A’ squad and had recovery in the afternoon, where we could go in the swimming pool or foam roll. We then had a team meeting and had to analyse training clips and make notes on what we should change in attack and defence in preparation. We also had our bloods taken again for testing.

Day 8 – Tuesday 23rd January
This was the last day at the training camp – and we played a friendly game against the ‘A’ squad. I was in goal in the second half and it was an amazing experience to be playing against the first team players.

I learnt so much from this training camp – I will bring back what I have learnt to Boston United and work on this to help improve my game and so I am hopefully selected for future training camps!