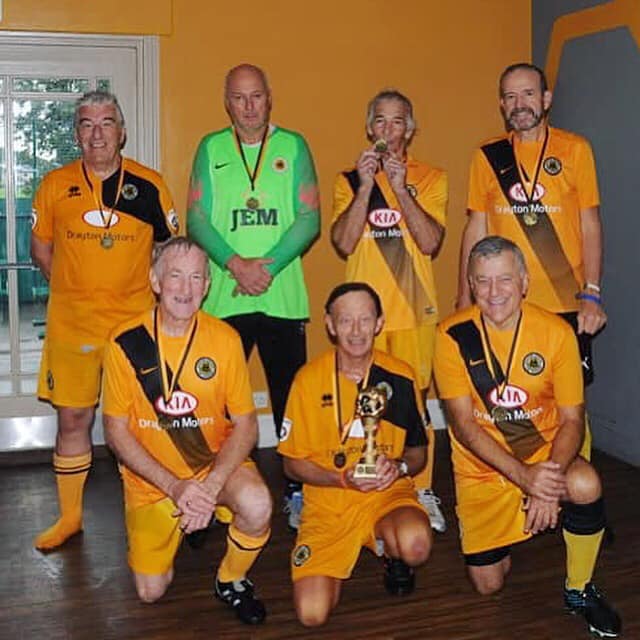 Boston United’s Over 65s had a brilliant afternoon on the Tuesday 24th September despite the weather – they won the Asha Healthcare Midlands League Cup at Nottingham Powerleague!

This was a great way to bring down the curtain on our Boston United Over 65s first season playing together in the Asha Healthcare Midlands League at Nottingham Powerleague where they finished as League Runners-Up as well.

The team topped their group by an impressive four points margin, scoring the most goals and without conceding once. They drew 0-0 with both Oakham in the semi finals before a 2-0 penalty shootout win then likewise with Nottingham Bramcote in the Final before winning 2-1 on pens once more!

This was a magnificent all-round team effort with all players playing a big part in not only today’s success but throughout the season which just got better as it went along as our group got to grips with the demands of League football.

It was a real pleasure to see all our lads pulling together, following game-plans and picking up the rewards their efforts deserve at the end of a very enjoyable season, very well done all of you.

Also credit to all the Clubs and players for playing Walking Football how it should be played and in the right spirit of the game.

We offer three weekly training sessions for our walking footballers, and we currently have over 80 regular participants! Anyone aged 45 and over is welcome to join – there’s no need to book just turn up, pay and play! We train every Monday 7pm to 8pm at Peter Paine astroturf, Tuesday 11am to 12pm at Swineshead Institute F.C. and Thursday 5.50pm to 6.50pm at Peter Paine astroturf – £3.50 per session.