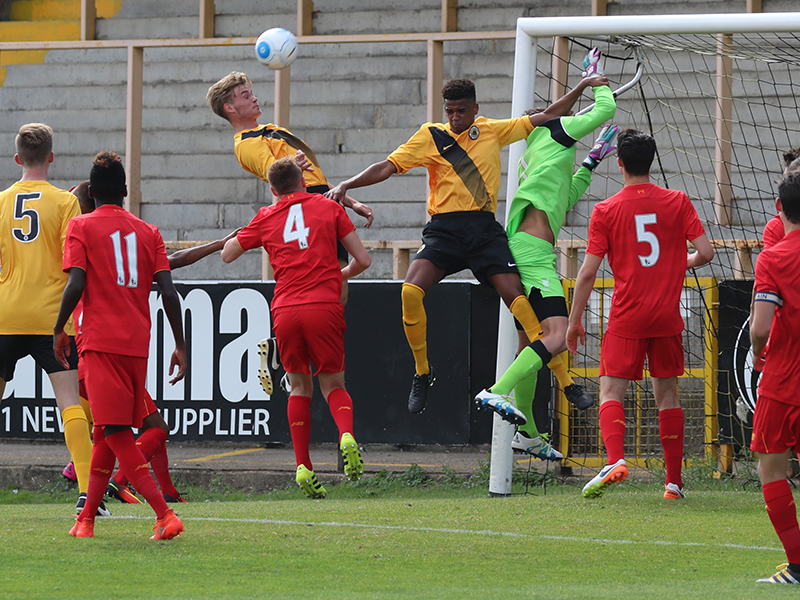 On Sunday 21st August, our Youth Team faced Liverpool FC Under-18s here at The Jakemans Stadium, with a crowd of 432. Although we were down 3-0 by half time, the players came back out in force in the second half and they played brilliantly.

First team signing Liam Adams scored twice on the day, making it 3-2, with the final score ending at 4-3 to Liverpool. Jenson Ball scored the third goal for Boston and what a great goal it was!! Marley Blair, Brad Garton, Rafa Camacho and Glen McAuley were the goal scorers for Liverpool.

We were cheering them on from the side line as it really was an exciting game. Everyone had their reservations on how well we’d do against the Premier League side, but they were brilliant. I get to see the boys on a weekly basis when they come for their training sessions, and I get to hear about their progress from their coach Martyn Bunce – and it was an incredibly proud moment when the final score of 4-3 came in. I’ll be honest, we thought we’d get smashed – and the boys proved us wrong! They played exceptionally well, and everyone at Boston United are very proud of them. Well done lads!

I’d also like to thank the supporters who came to cheer them on – this was a great learning curve for the players, some of which have never played in front of a crowd so we are thankful for those that came. The players really enjoyed the day, and we hope that you’ll support them at any future fixtures we organise for them.

I am currently seeking a shirt sponsor for our Youth Team. This is a great opportunity to support the players, as sponsorship helps with costs towards player development and equipment. It also gives them confidence knowing someone is backing the team! There’s a variety of benefits, including: