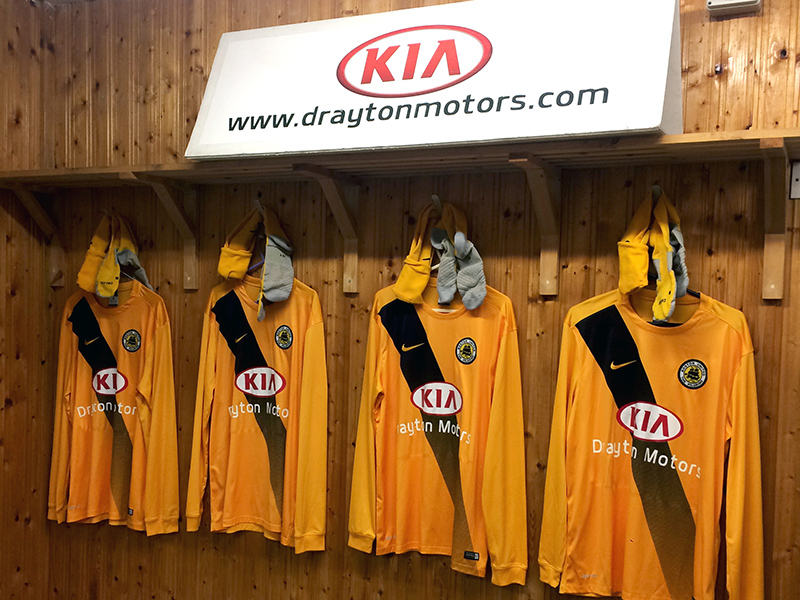 The local Kia dealership will have their logo emblazoned on both the Youth Team and Under-21s’ amber and black and purple Nike shirts for the remainder of the 2016-2017 season.

Martyn Bunce, Youth Team manager said of the deal “I would like to extend our thanks to Darren Bradford and the team at Drayton Motors. They have sponsored the first team over a number of years, and we are pleased they have extended this partnership and support to the Youth Team and Under-21s. It is really appreciated as it helps the players to develop even further. The youth team are doing exceptionally well this season in both their FA Youth Cup fixtures and league games, and we feel proud to have such a prestigious local company backing the team.”

Darren Bradford, general manager of Drayton Motors, said: “The past three years have been a delight to sponsor our local team, Boston United and we are pleased to offer our extended support to two of Boston United’s elite football teams. We understand the importance of player development and sport in our local community and are looking forward to keeping up to date with the teams’ progression over the rest of the season. Good luck to both teams!”

The Boston United Youth Team will debut their sponsored kit at their next FA Youth Cup qualifying round against Kimberley Miners Welfare on Wednesday October 19th at The Jakemans Stadium, KO 7.45pm.The Under-21s will wear the sponsored kit on the same evening at a season friendly against Bourne Town.

Drayton Motors are a local car dealer in Lincolnshire, specialising in Kia. As a manufacturer, Kia is famed for the ‘7 Year Warranty’ package offered to new car purchasers — across models such as Picanto, Rio, Cee’d and Sportage. For more information about Drayton Motors call (01205) 535177 or visit www.dealers.kia.co.uk/draytonmotors.